As in the western European and U.S. versions of the pressurized water reactor, each Reactor Coolant Loop includes a Steam Generator and a Reactor Coolant Pump. The water passes through the inside of the tubes in the steam generator. The Reactor Coolant Pump circulates the water for cooling the Reactor Core. The system is pressurized to 2200+ pounds per square inch by a Pressurizer (not shown), which is connected to one of the reactor coolant loops. Spray valves and heaters are used to control pressure within the allowed band. A major difference between western designed PWRs and the VVERs is that the latter have horizontal steam generators. The older VVERs have isolation valves in the reactor coolant loops and accident localization compartments. Please click for an illustration of a VVER plant layout with a containment. Example diagrams courtesy IVO Group - Finland

Water passing on the outside of the steam generator tubes is heated and converted to steam. The steam passes to the Turbine as in the Pressurized Water Reactor case discussed elsewhere at this site. The Turbine drives the Generator as in all cases discussed. Steam in the VVER design is not expected to be radioactive.

Sources of information on the VVER design include:

The Nuclear Energy Institute's Sourcebook on Russian Design Reactors provides extensive information on the reactor design and particulars on each VVER station in Russia and the former Soviet countries.

Argonne National Laboratory (ANL) presents a good graphic of each style of VVER plant with a numbered legend indicating each of the major components; however, there is currently a limited description.

The VVER 440 design includes accident localization zones and a confinement rather than a true containment. Loviisa 1 and 2 are the exceptions which do have the western-style containment. The VVER 1000 has a traditional containment. 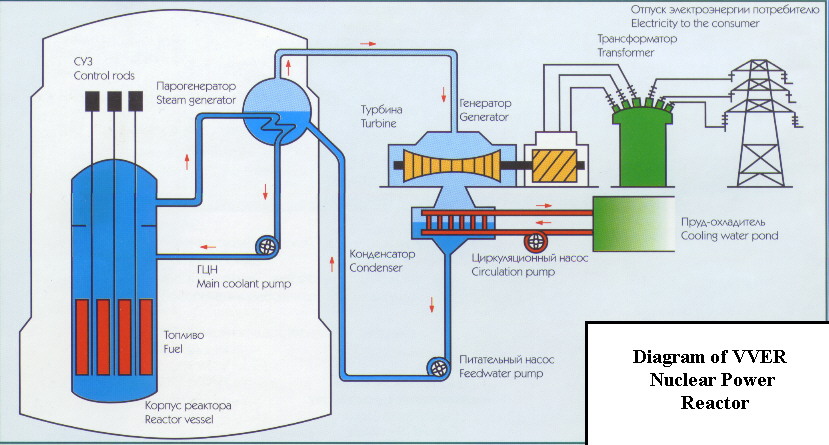 The Institute of Physics and Power Engineering (IPPE), based in Obninsk, Russia, served a technical developmental and advisory role similar to the national laboratories in the United States. The IPPE presents a good description of the various types of Russian design plants and the upgrading efforts that have been supported by the Pacific Northwest Laboratory (PNL) in Richland, Washington. Both provide good sources of information about the current state of Russian technology.

Inside views of a VVER facility (courtesy Bohunice) are provided on this website.